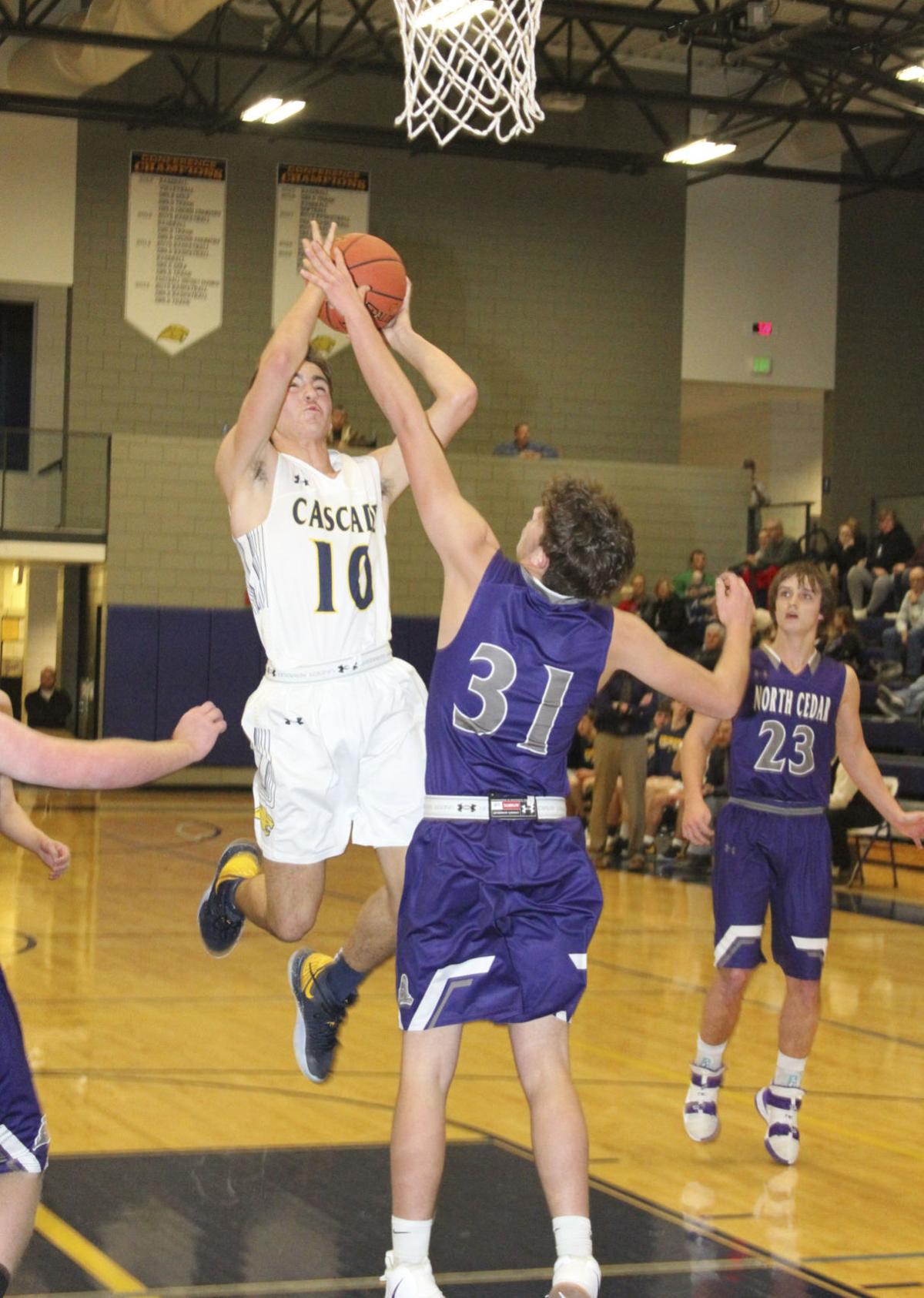 Carter Green takes the ball to the basket during the Cougars’ River Valley Conference battle with North Cedar at Cascade, Dec. 18. 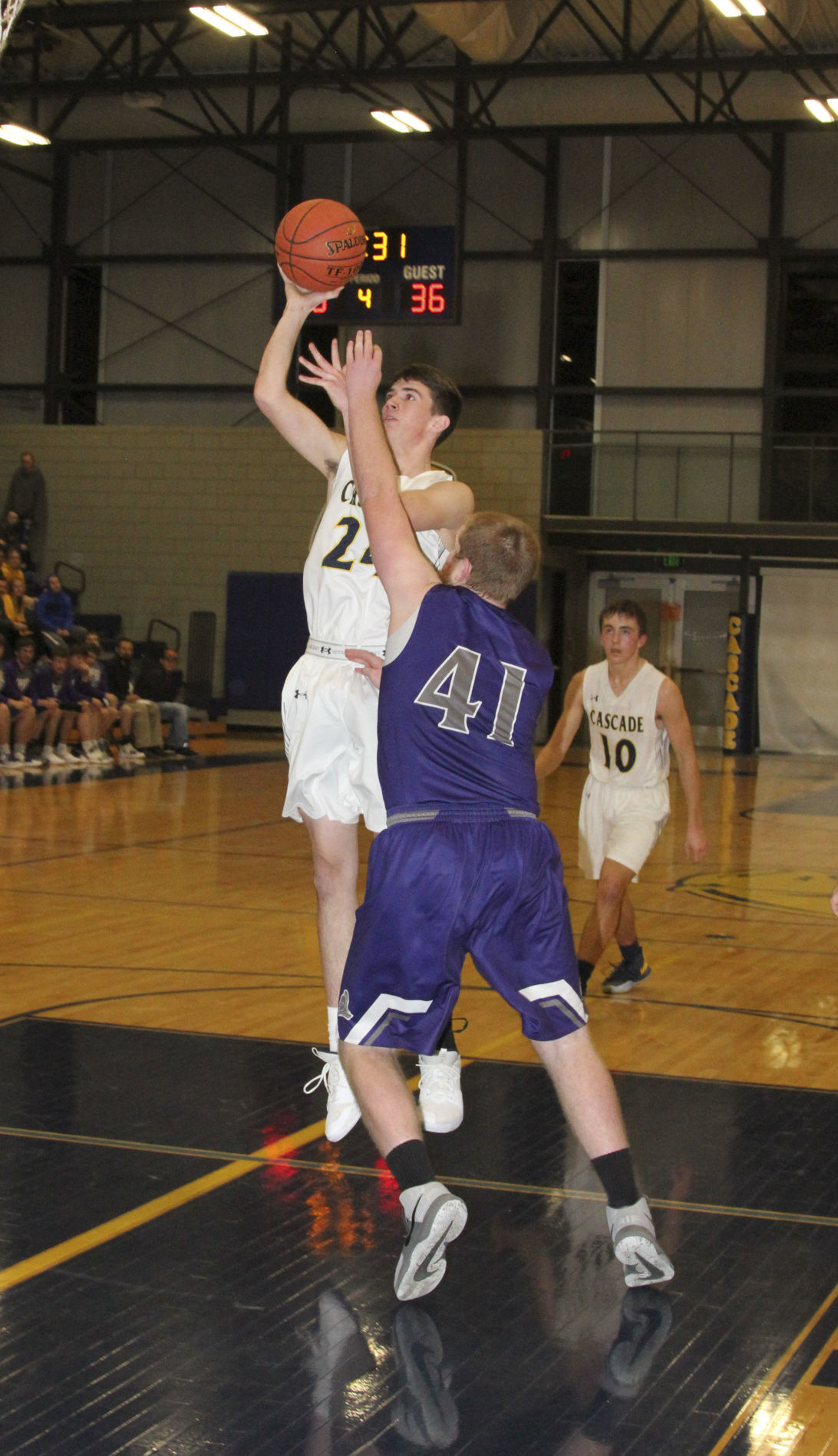 Carter Green takes the ball to the basket during the Cougars’ River Valley Conference battle with North Cedar at Cascade, Dec. 18.

“This was such a great effort by these guys. They totally sold out and played harder than they have so far this year. They came out, competed to be who they can be on the court,” said Jacob Brindle, head coach of the Cougars. “I’m so very proud of them. This was easily the best total energy and focus effort so far this season.”

Everything the Cougars had been struggling with and trying to fix got corrected when they stepped onto the court against Mid-Prairie. A lot of those things are easy to change when you start to see the ball go into the basket. Credit goes to Reinke who got the Cougars going by being aggressive with the basketball for 11 of his points in the first half. Carter Green and Michael Trumm both added six points in the opening half to give Cascade a 25-9 halftime lead.

The offensive efficiency continued in the second half for the Cougars when they stretched the lead to 19 points with just eight minutes left to play. Cascade also greatly improved their ball-handling skills, committing just five turnovers.

“These guys moved the ball well tonight and they guarded their butts off,” said Brindle pointing out that his guys held Carter Harmsen, Mid-Prairie’s leading scoring who averages 15.8 points a game, to just six points. “They turned this thing around and have it pointed in the right direction.”

Alex Aitchison added seven points, Trumm six, Eli Green and Cooper Rausch five, while Jackson McAleer and Hugh Molony came off the bench to score two. The Cougars also saw improvement from the free-throw line as they made 10-of-12.

Earlier in the week, the Cougars let one get away after they staged a strong comeback to get into their game with North Cedar. Cascade found themselves down by 10 at halftime, 26-16, but came out of the break to score 14 unanswered points, 30-26. Fueled by Trumm’s back-to-back threes, followed by an easy basket by Carter Green off a smooth-dribble-drive dish from Rausch and back-to-back offensive putbacks by Reinke and Aitchison, the lead was four for the Cougars. It was their biggest lead of the night, but one they couldn’t build on which would end up costing them in the end.

It was even at 34-34 going into the fourth quarter and Cascade wanted to play with the lead so they did. Eli Green scored the opening points of the quarter to give them a 36-34 lead, but North Cedar answered every time to tie the score.

Rausch’s fancy drive to the lane ended with a scoop lay-up to make it 38-36. Reinke had a chance to extend the lead but missed two free throws. North Cedar answered.

Trumm stepped up to knock down a big three-point basket with 3:31 left to go up 41-38. North Cedar responded with a two-point basket so Cascade was still up by one, but the Cougars’ free throw shooting issues continued and kept them from extending the lead. Carter Green did make the front end of a one and one but missed the back end keeping the lead at two, 42-40.

After coming up with a defensive stop, Rausch was immediately fouled with 46.2 left to play. He went to the line to shoot two shots, but he missed both.

Kael Unruh scored a basket to tie the game at 42-42 and Rausch had another chance to help his team as he was fouled with 21.4 seconds left in the game. He missed the first free throw but got the second to go up 43-42.

The Cougars played tough defense, but Gage Walshire managed to get loose in the lane and went strong through a foul to make the basket as North Cedar took a 44-43 lead with 3.5 seconds left. Walshire missed the free throw. Cascade grabbed the rebound and immediately called a timeout with 2.5 left on the clock. Brindle designed a play that gave Trumm a good chance at a three, but it bounced off the rim as the buzzer sounded.

“We are having little flurries of possessions that are keeping us from being a much better basketball team. We have to step up and make free throws and not turn it over in pressure situations. That’s the gap these guys are fighting to close. We have to get on the right side of those possessions,” said Brindle after the disappointing loss. “Our number one goal right now is to get better. We saw tonight that we can play well and we saw some things that we can get better at.”

Statistics against Mid-Prairie were not available at press time.