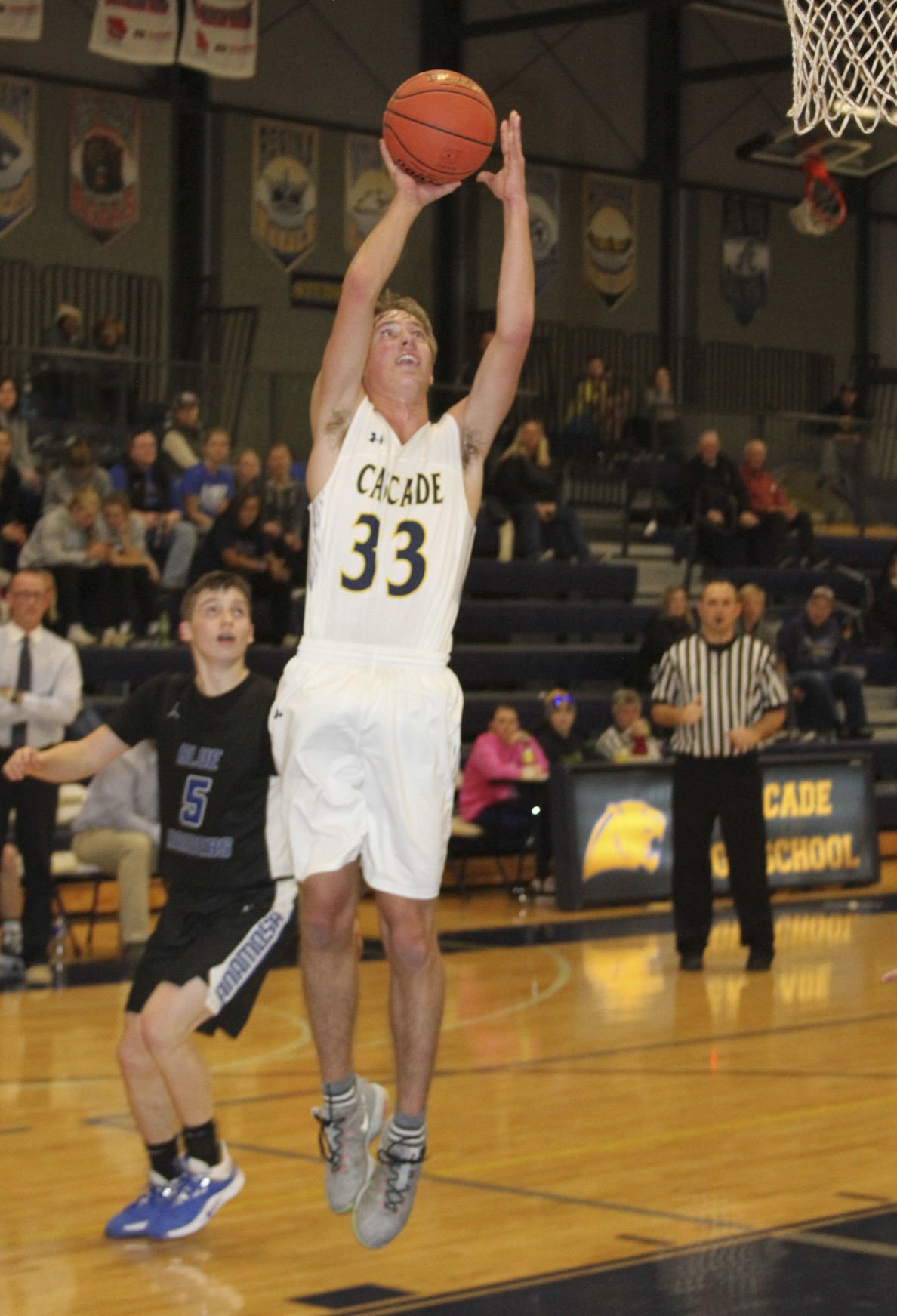 Caden Reinke gets to the basket to score two points against Anamosa. 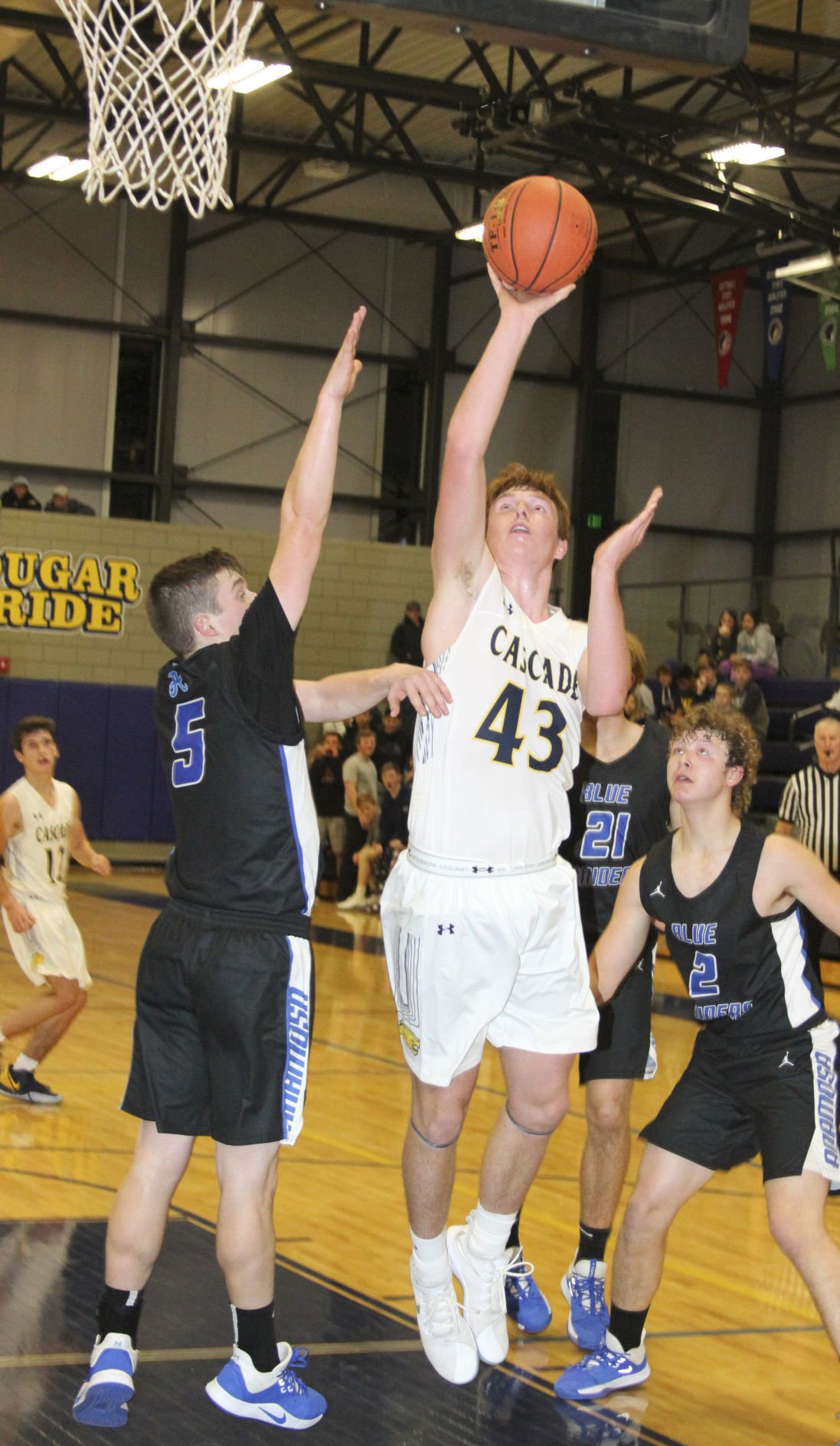 Alex Aitchison attacks the basket for an easy two points late in the fourth quarter of Cascade’s 49-38 win over Anamosa.

Caden Reinke gets to the basket to score two points against Anamosa.

Alex Aitchison attacks the basket for an easy two points late in the fourth quarter of Cascade’s 49-38 win over Anamosa.

Playing with the lead is much better and more fun than playing from behind is a lesson that didn’t take long for the Cascade boys’ basketball team to learn this season, but being able to play with the lead is something the Cougars will have to figure out how to do as they work to improve through the season.

The Cougars got their first taste of playing with the lead in their 49-38 win over Anamosa in Cascade Dec. 3, but they struggled and played from behind way too long in their 65-58 loss on the road to Camanche Dec. 6.

According to Jacob Brindle, the Cougars’ head coach, his team’s contest with Anamosa felt a lot more like a district semi-final game than the season opener for both teams. Baskets by Eli Green and Caden Reinke were followed by Carter Green’s three-pointer that keyed a 7-to give the Cougars a 12-4 lead with under two minutes to play in the first quarter. Before the half was over, the Cougars found themselves looking up at the scoreboard trailing, 20-16.

Even though they were down, Cascade knew they weren’t out as they regrouped during halftime and came out focused on continuing to just play hard.

“Our number one skill that this team is good at is going out and playing hard. No matter who gets in there and who does what, they just do it hard,” said Brindle after posting their first win of the season. “We just need to continue to get better during the game.”

Get better during the game is exactly what the Cougars did against Anamosa and the improvements were made on both the offensive and defensive ends of the court.

Offensively, the Cougars like to play fast, but for most of the first half, they were playing too fast. Bad passes turned into short possessions that resulted in easy points for Anamosa. In the second half, Cascade continued to attack the basket, but they did it under control and that created scoring opportunities for the home team.

Green scored seven straight points in the middle of the third quarter to give Cascade a 25-24 lead. Anamosa responded with four points to retake the lead at 28-25, but then the Cougars started to run their offense through their big man senior co-captain Alex Aitchison. He sparked a nine-point run capped by Cooper Rausch’s three-point play and a six-point lead with under a minute left in the third.

Not so fast said Sam Wilt who knocked down a three that cut the lead in half, 34-31, at the end of the third quarter.

Cascade stayed aggressive with Reinke leading the way early in the fourth. He scored the first basket of the final frame and his basket on an assist by Aitchison after a three-pointer by Rausch gave the Cougars a five-point lead at 41-36 with 4:31 left in the game. Aitchison scored six of Cascade’s final eight points to help the Cougars close out their first win of the season in this exciting game that featured nine lead changes and three ties.

“Coach Al Marshall always talked about getting one board better. We got a big board better with this win. We could have easily lost this game,” said Brindle. “We were down at halftime, things weren’t going our way and we couldn’t score, but we have to be able to make shots and we did. We came out and got a couple of buckets inside and went to work.”

The Cougars knew they would have their hands full when they faced off on the road against Camanche, but they showed up and once again improved during the game even though they took their first loss of the year. Behind from the start, down 11-4 after the first quarter and trailing 25-18 at halftime, the Cougars didn’t stop battling. Camanche, picked to be one of the top contenders in the River Valley Conference, built a 14-point lead going into the fourth quarter when Green and company launched a furious comeback. It wasn’t enough as they ran out of gas falling, 65-58.

A trio of Cougars scored in double digits with Green leading the way with 16 points followed by Rausch’s 13 and Aitchison 10.