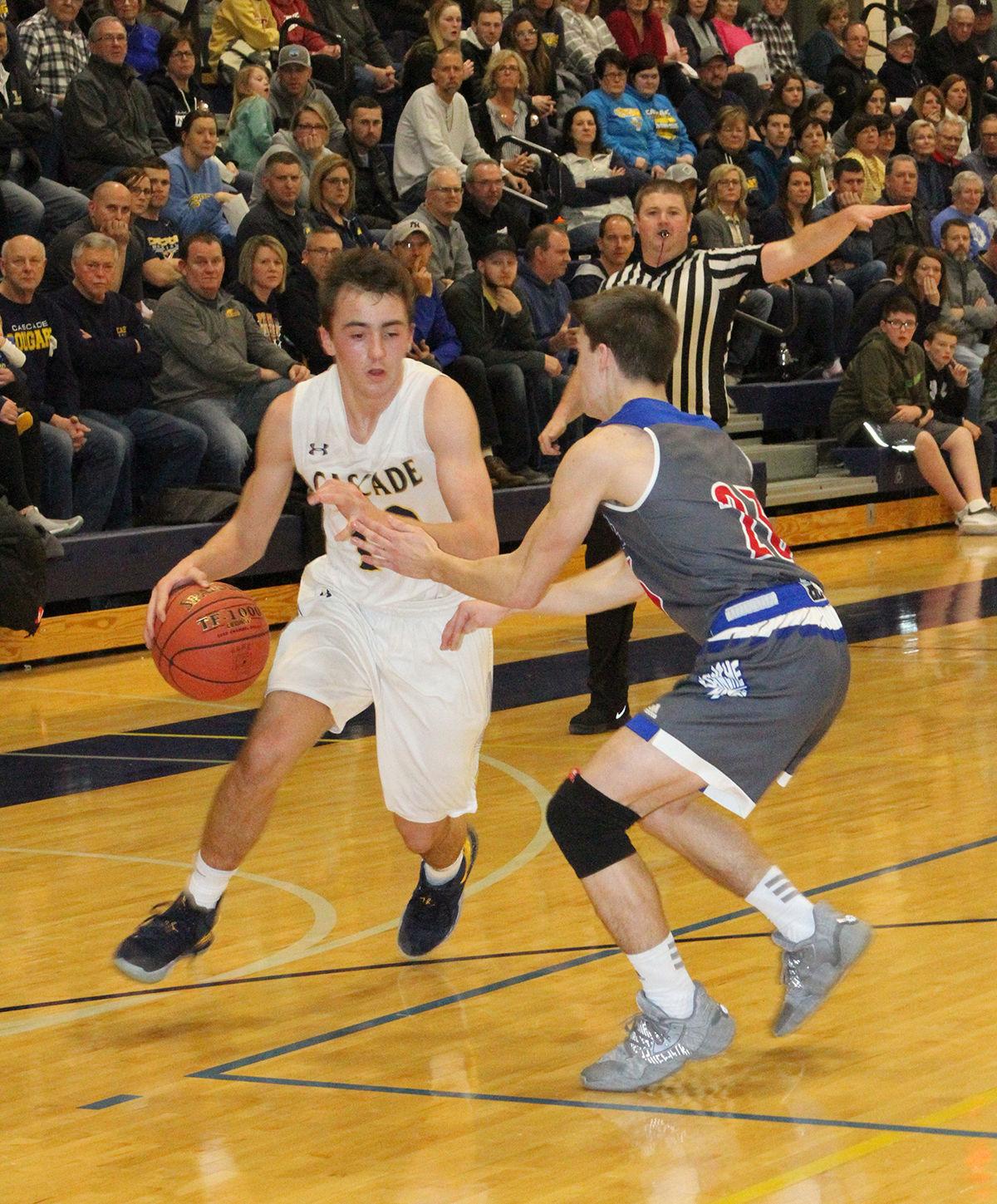 Carter Green dribbles his way around a defender in the first half of Cascade’s 59-52 loss to Camanche Jan. 21. 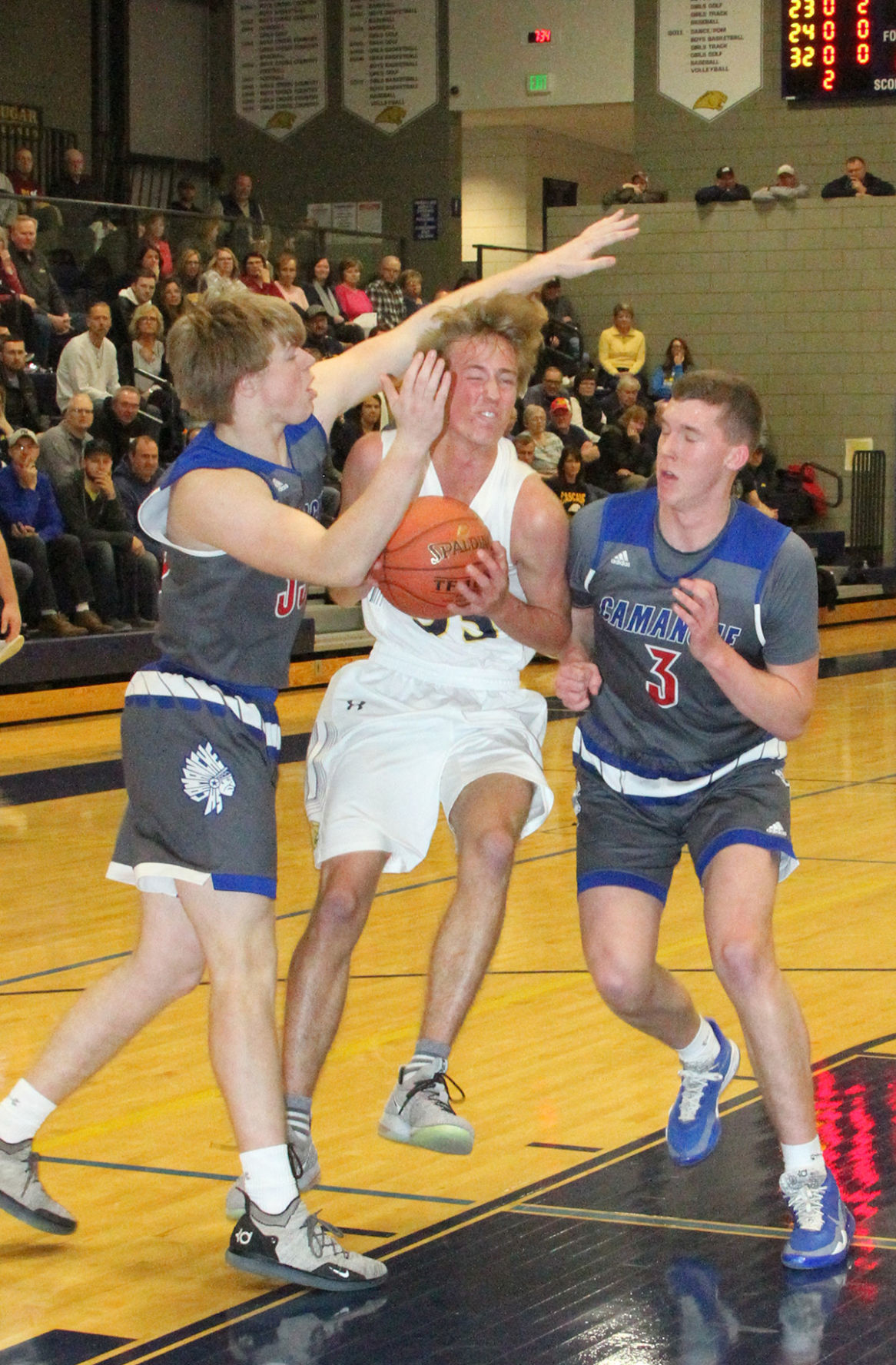 Caden Reinke works his way to the hoop for Cascade during their 59-52 loss to Camanche Jan. 21.

Carter Green dribbles his way around a defender in the first half of Cascade’s 59-52 loss to Camanche Jan. 21.

Caden Reinke works his way to the hoop for Cascade during their 59-52 loss to Camanche Jan. 21.

From how badly the week started for the Cascade boys’ basketball team, it couldn’t have ended much better as they blasted South Winneshiek, 62-35, to finish the week 1-2, winning their non-conference game played at Upper Iowa University in Fayette, Jan. 25.

The Cougars’ week began with a 56-31 loss at Monticello, Jan. 20. The next night Cascade put up a fight but struggled to score down the stretch as the Cougars lost to undefeated Camanche, 59-52, Jan. 21, in Cascade.

Earning that win against South Winneshiek (10-6) pulled the Cougars even at 7-7 for the year and 6-6 in the River Valley Conference North after losing those two conference games earlier in the week, but it was the signs that this team showed during their loss to Camanche that got them headed in the right direction.

“We took a big step tonight,” said Jacob Brindle, head coach of the Cougars. “It was more than a step. It was more like we went through a door and shut it behind us. I think this is really going to help us going forward.”

That’s what Brindle had to say after witnessing his team battle for 48 minutes against a physical and talented team who leads the River Valley Conference North at 11-0, a game ahead of Monticello at 10-2 in conference play.

All game long, the Cougars showed that they could play the same tough style of basketball that Camanche was pushing. Down 30-22 at halftime, Cascade cut the lead four points midway through the third. Camanche went on a 9-0 run to push the lead back to 13 only to see Will Potter and Michael Trumm splash threes and Caden Reinke score a basket on an impressive one-on-one move that brought the Cougar Nation to their feet. The lead was back to five entering the final eight minutes of play.

The comeback continued to be led by the spirited play of Carter Green who scored five points during a 7-3 run that got the Cougars to within one point with 4:36 left to play. Camanche’s Caleb Delzell and Reinke traded two points to keep the lead at one, 48-47, and after the Cougars created a stop they had the ball with a chance to take the lead. They failed to get a good shot at the basket and the Indians closed the game on an 11-4 run to earn a hard-fought win.

“I could not be more proud of how the guys bounced back and played tonight. We wanted to win this game and we played like it. They are a top team in the state, they are at full speed and it was a one-point game late in the fourth quarter,” said Brindle. “It was a one-possession game and we feel like we could have won this game. We played fearless. A lot of guys made big plays. A bucket here, a bucket there and it’s a different outcome.”

The Cougars continued to play with confidence and fearlessness as they put a beating on South Winneshiek. Cascade jumped out to a 28-19 advantage after the first half of play. The lead grew to 14 points entering the fourth quarter only to see the Cougars empty their bench on their way to a 27-point win.

“We played exactly how we need to play. We moved the ball real well. It was a little sharper and crisper than what it had been,” said Brindle. “When you do that, your shots are a little more open and you’re a little more ready to shoot it. It was a pretty complete game for us. I felt pretty good leaving there (Saturday).”

The offense took a huge step up and ball movement had a lot to do with that as they had 18 assists on 22 made baskets. Trumm was seven of nine from three-point range and Carter Green made three of his five three-point attempts, but a big key to the offensive success of the Cougars was only turning the ball over five times in the game.

Of course, the defense also played a big part in this win for the Cougars as South Winneshiek made just 11-of-42 shots from the field and scored over 20 points under their season average. Cascade also did a good job cleaning the defensive glass as they collected 24 defensive rebounds.

“If our defense is doing its job, there’s going to be a lot of missed shots,” said Brindle. “It doesn’t do us any good to create all those missed shots if we don’t go get that missed shot.”