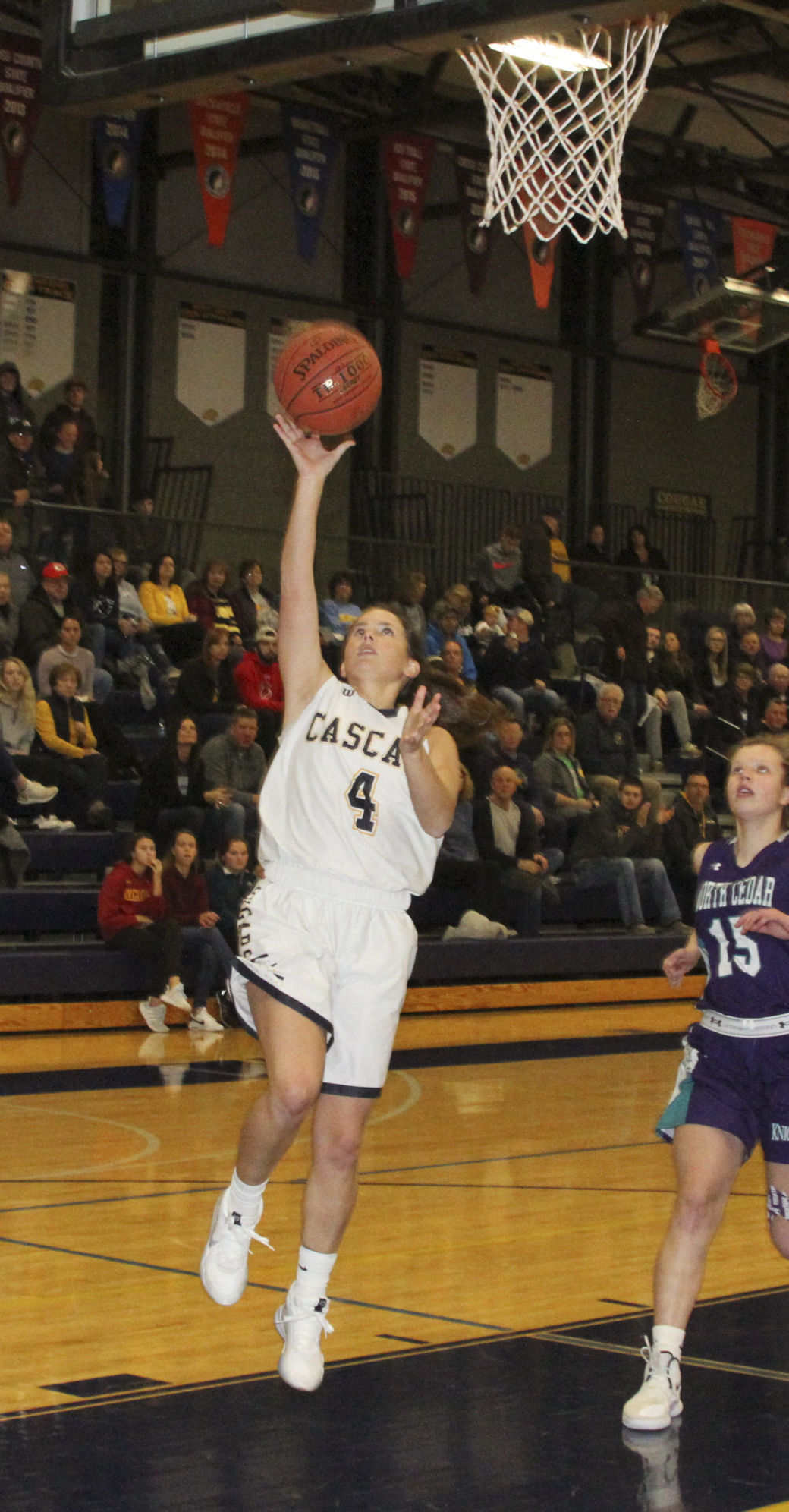 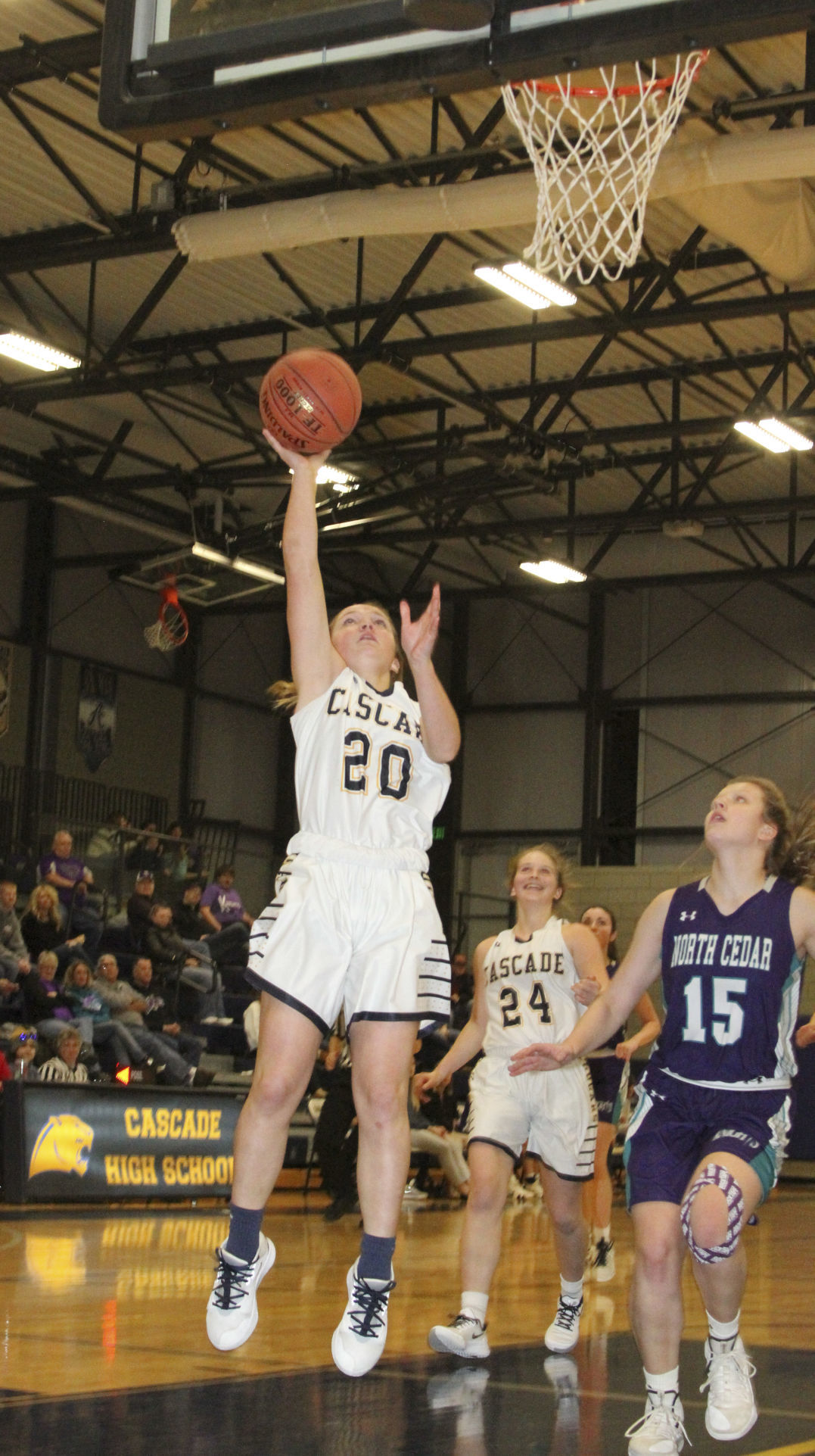 If defense is the fuel that’s filling up the tanks of the Cascade girls’ basketball team then stand back and get ready for takeoff as the Cougars look to be setting a flight path to the moon. They outran North Cedar, 74-21, Dec. 17 and Mid-Prairie, 76-34, Dec. 19, both in Cascade.

Eleven of the 12 players on the Cougars’ roster scored in their River Valley Conference battle with North Cedar as they easily beat the Knights. Up 20-6 after the first quarter, Cascade then exploded for 32 points in the second quarter and coasted to a 53-point victory.

“I thought we moved the ball well and we were unselfish. We were pretty active on defense too,” said Mike Sconsa, head coach of the Cougars. “We did what we needed to do and got a lot of kids playing time which is always great. As a team, we got a little bit better, which is great. It was a nice win for us.”

Active hands and playing the passing lanes created many fast break opportunities for the Cougars as they applied pressure when the ball got near half-court. On the rare possessions when the Knights were able to get the ball into their offensive end, Jordan Simon was on the back end swatting away shots. Simon might have been the only Cougar not to score a point, but she did block 10 shots that keyed their defensive effort for the night.

“We talk about total team basketball a lot. It starts and ends with our defense. We’re still not where I’d hope we’d be with our defense,” said Sconsa pointing out some issues that they need to address to get to where he wants them to be. “Overall, we played hard and played well together. I’m really happy with how things turned out.”

Ally Hoffman had 15 points to lead the Cougars balanced scoring attack. Skylar Dolphin had 14 and dished a team-high six assists and Nicole McDermott added 12 points. Abby Welter, eight, and Simon round out Cascade’s starting five who, along with Faith Bower and Alyssa Lux, are getting a majority of the playing time this season. But when those top seven are no longer on the court, they turn into the biggest and loudest cheering squad in Cougar Nation.

“They know that this is their senior year and each game they play is one less that they have in the regular season. They are great teammates and great leaders,” said Sconsa of his four seniors, McDermott, Simon, Welter and Dolphin. “They are the type of kids you want to have on your team and play for you. This team is lucky to have them.”

It was much of the same for the Cougars when they hosted Mid-Prairie just two nights later. Four players scored in double figures as they used a 28-7 third quarter to put the Golden Hawks away. McDermott scored 20 points while Dolphin chipped in 15, Ally Hoffman 13, Welter 10, Elizabeth Gibbs six, Simon and Sydney Weber five and Taryn Hoffman three.

“The entire team played hard and shared the ball well against Mid-Prairie. We were aggressive in the second half of the game and did a better job of limiting them on the interior,” said Sconsa. “I am proud of how hard the girls continue to compete. Now, we have to get better as a team and keep working.”

Statistics against Mid-Prairie were not available at press time.