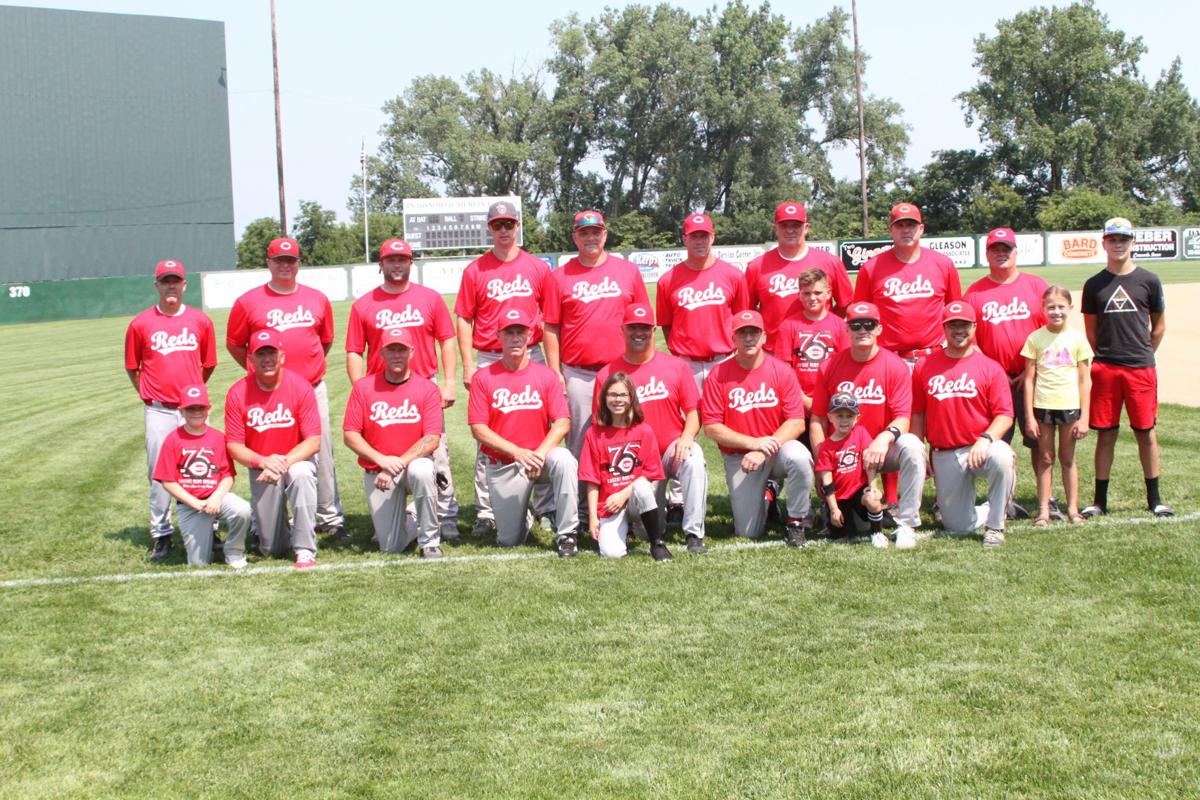 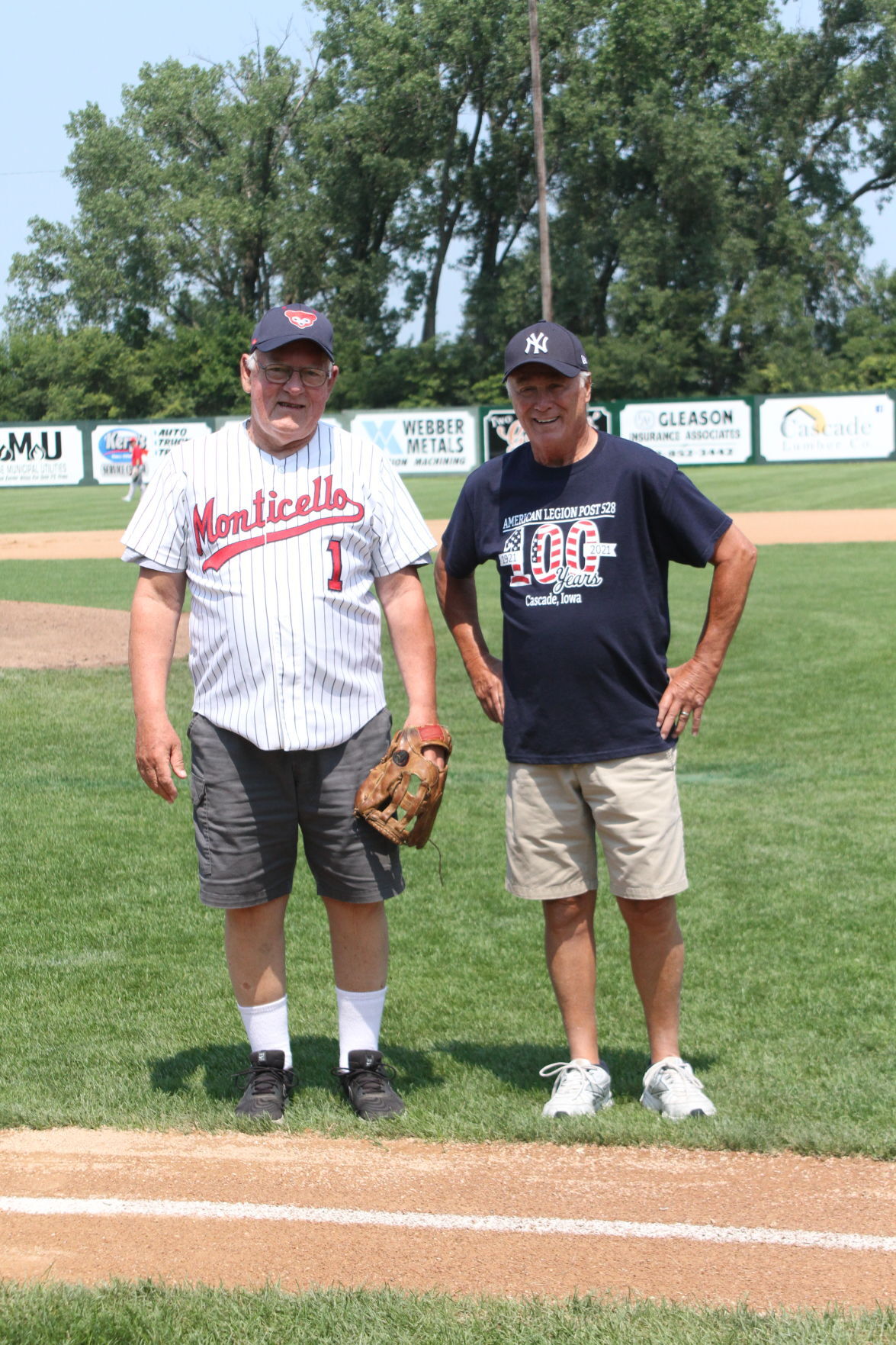 Bob Hines, left, and Bob Green, right, took part in the ceremonial first pitch prior to the Legends game. Green, a former Reds player and pitcher, threw to Hines, a former player with the Monticello Cubs. 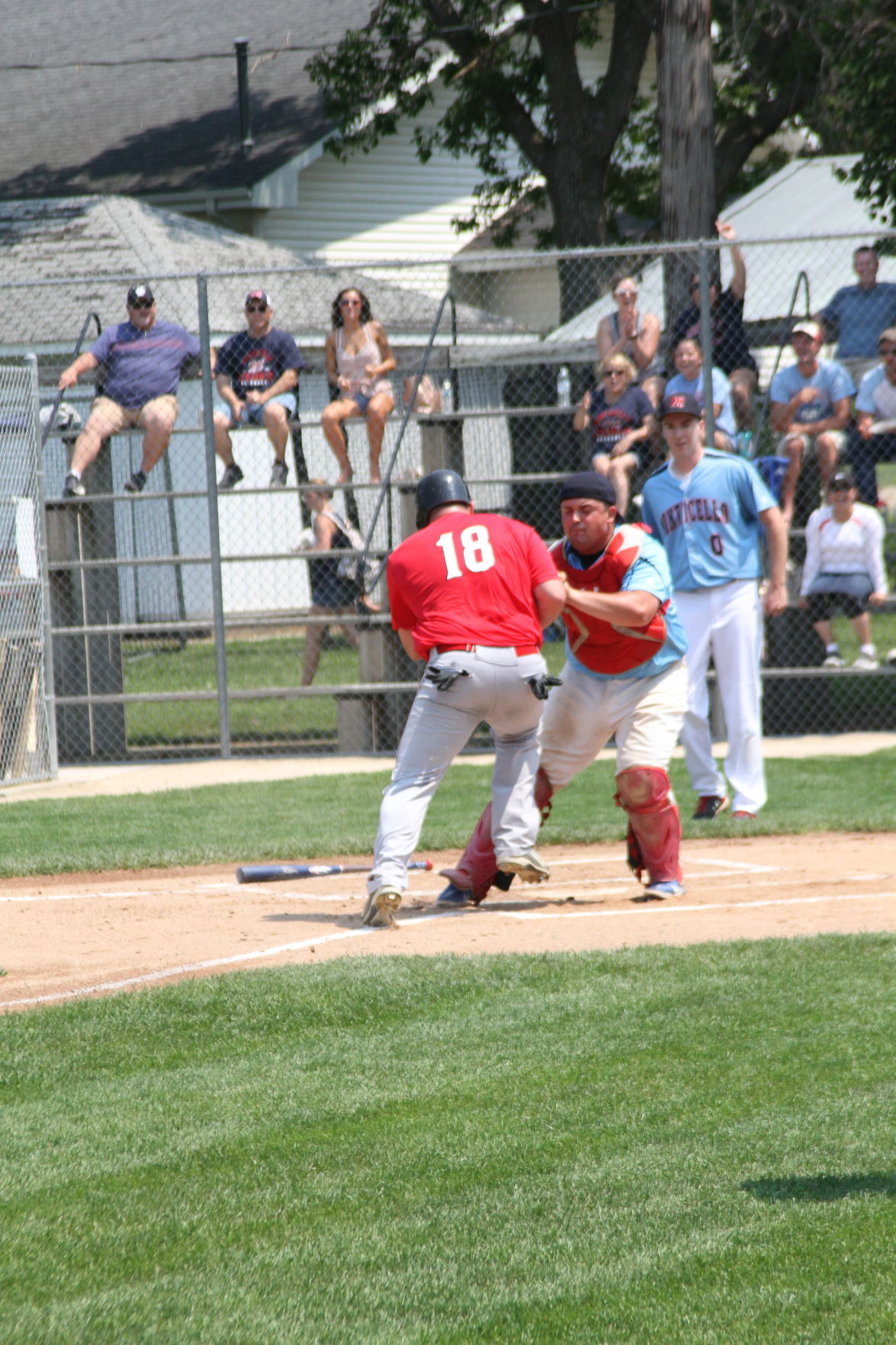 Legends player Tim Andrews attempts to score but was tagged out by Monticello catcher Michal Reuter.

Bob Hines, left, and Bob Green, right, took part in the ceremonial first pitch prior to the Legends game. Green, a former Reds player and pitcher, threw to Hines, a former player with the Monticello Cubs.

Legends player Tim Andrews attempts to score but was tagged out by Monticello catcher Michal Reuter.

The game was scoreless through four innings before Monticello scored seven runs in the top of the fifth.

Comprised of former Reds players, the team came together as a way to celebrate the tournament’s 75th anniversary.

Judging from the crowd and the players’ reactions, keeping a Legends team in future tournaments may be something tournament officials want to consider.

Make no mistake, this wasn’t an old timers’ game. The team was competitive and wanted to win.

The Legends managed one hit, a single by Dan Lynch in the second inning. With one out in the inning, Tim Andrews lifted a high fly ball deep to left field that looked like it had a chance to leave the park. Monticello left fielder Matt Holmes misplayed the fly ball, allowing Andrews to reach second base.

Andrews tried to score on Lynch’s two-out single but was thrown out at the plate by center fielder Andrew Mescher to end the Legends’ threat.

In the fifth, the Cubs scored their runs on three hits and six walks.

Weber threw the first three innings for the Legends, allowing one hit and striking out two. He was replaced by Nauman, who retired the Cubs in order in the fourth and was relieved by Green in the fifth after allowing a single and a pair of walks to load the bases. Green faced six hitters, walking four and giving up a single. He was replaced by Rea, who allowed an RBI single before getting the final out.

Peters, who played with the Reds for nine years and ended his career after the 2002 season, said he enjoyed the game. At 47 years of age, he said it felt good to be on the diamond. “It’s been a few years since I’ve played, but it was great to be out there. I was a little slow, but not bad. I haven’t seen most of these guys in 15 years, so it was nice to be back. Hopefully, we can do this again next year. I would definitely come back.”

Weber said the packed stands were proof that putting the team together was a good idea. “This was kind of a last-second idea on the baseball committee’s decision to do this and it turned out to be the biggest marketing idea of the tournament. We had talked for a couple of years with some of the guys who made that great Reds’ run from 2000 to 2010 that it might be a great idea to get together again and play in the 75th anniversary.”

Weber said Reds’ teams won over 600 games during that 10-year run. “Most of these guys have families now, so their kids got to see their dads play baseball. Families were here today and that’s what it’s all about.”

Weber, 55, was the oldest player on the Legends team and last played for the Reds in 2018. “The game is a little quicker and we’re not as quick anymore, but it’s still baseball. It comes down to throwing strikes and that was the problem today.”

Weber said the Legends team returning next year is a possibility. “If it’s something folks want to do, I’d continue to do it. My biggest thing is I want semi-pro baseball to survive. We were competitive today, we wanted to win. This was a Legends’ game and not an old timers’ game.”

Barbara Ann Holub, 82, of Epworth, and formerly of Cascade, pa…