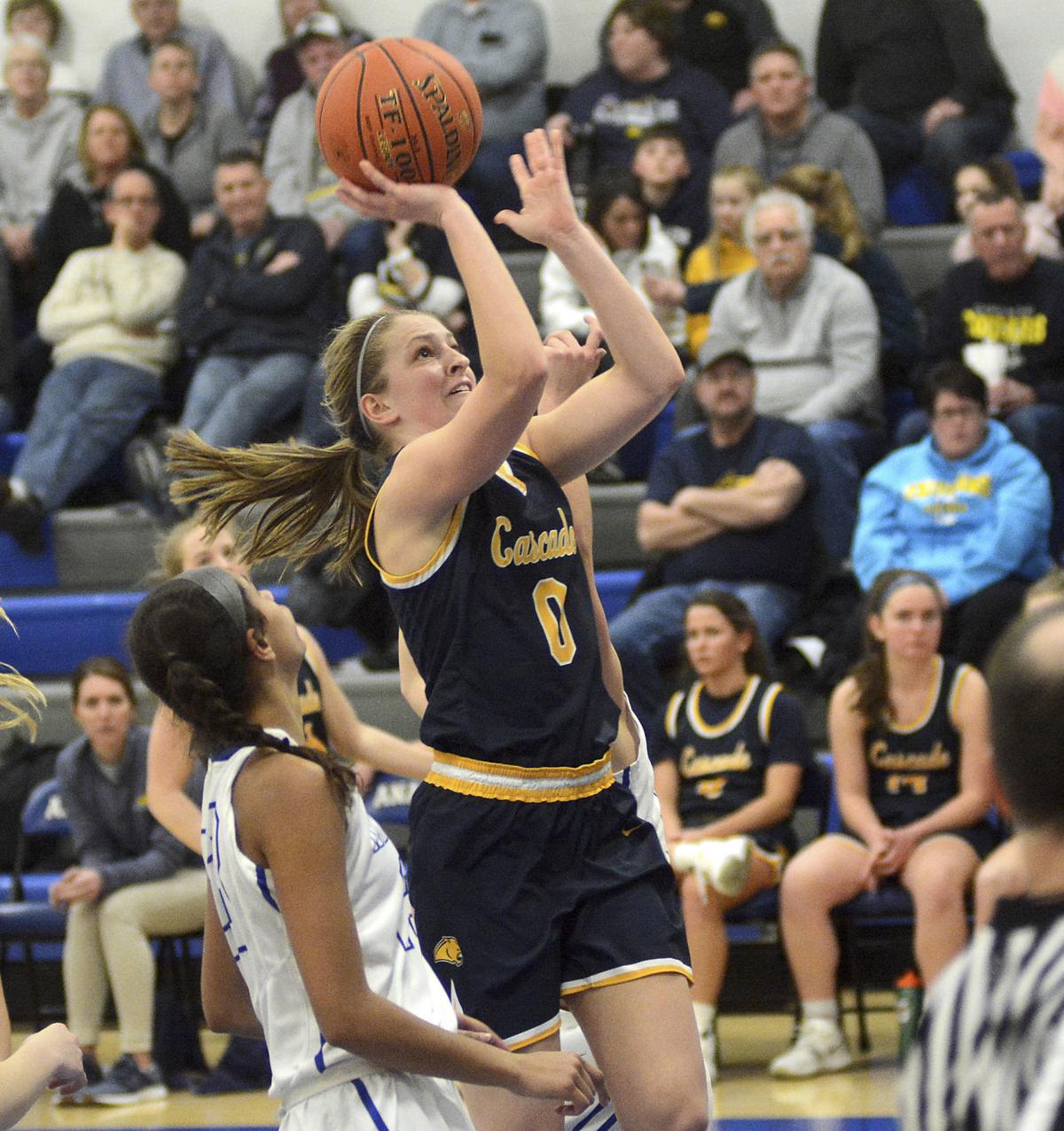 Nicole McDermott puts up a shot at Anamosa. 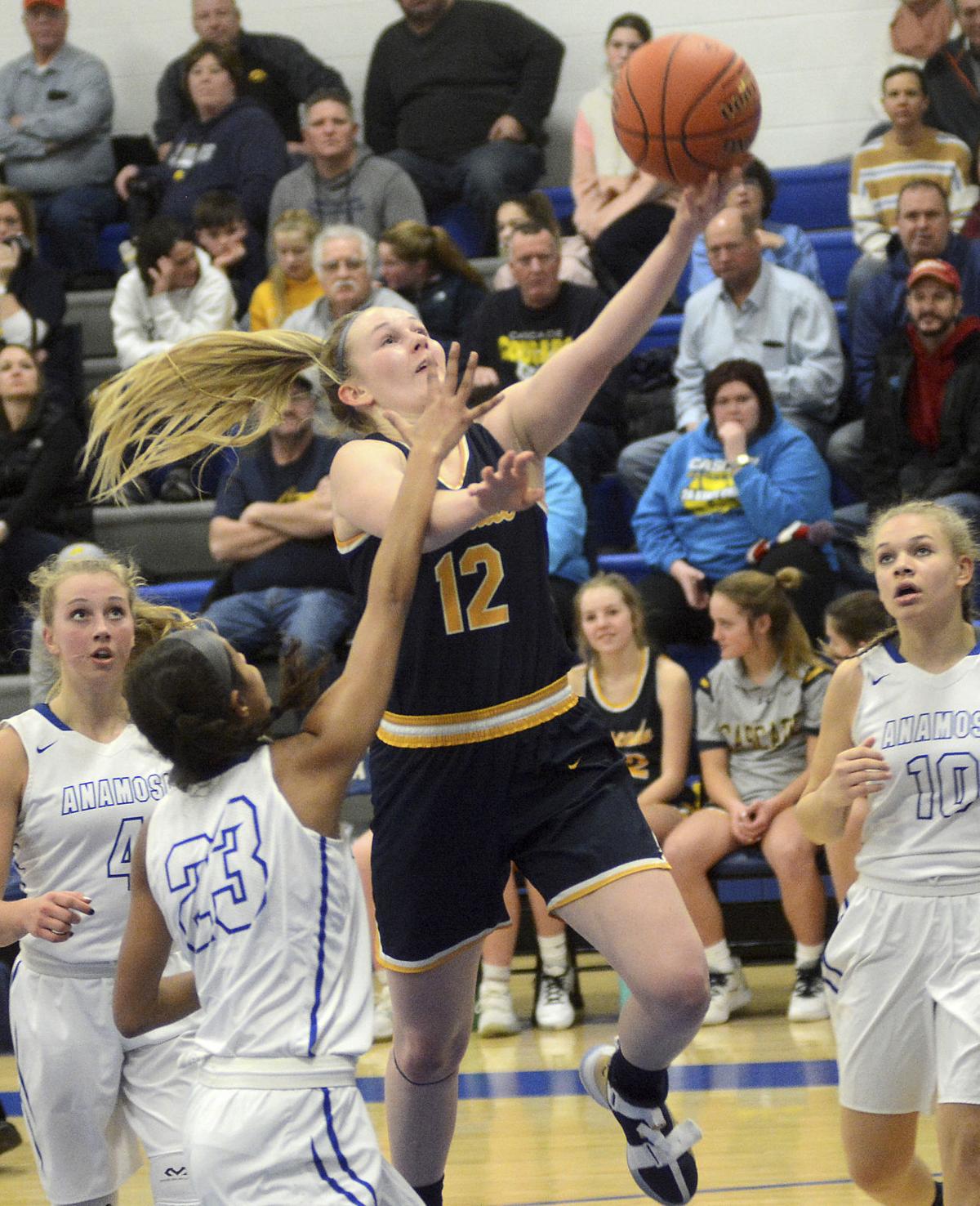 Nicole McDermott puts up a shot at Anamosa.

The Cascade girls’ basketball team had one of the most impressive statistical games of the year when they crushed Northeast, 72-32, at Goose Lake, Jan. 14. The Cougars then outscored Anamosa, 38-10, in the first half on their way to posting a 59-16 win over the Raiders in Anamosa, Jan. 16.

Nicole McDermott didn’t miss a shot as she scored a game-high 20 for the Cougars in their win over the Rebels. McDermott was 2-of-2 from three and made her other two shots from the field to account for half of her 20 points. The other 10 points came from the free throw line where she was 10-of-10.

Abby Welter had 11 points and Skylar Dolphin chipped in 10 while Jordan Simon scored nine and Ally Hoffman eight. The Cougars’ starters accounted for 58 points in the team’s 40-point rout. The starters made 19-of-30 shots from the field including 8-of-14 from a three-point range. As a team, the Cougars made 19-of-23 from the free throw line. They made 22-of-44 field goal attempts and assisted on 19 of those baskets.

“We started a bit rusty from the week off due to the weather, but the team played well in the second quarter. We shared it well and everyone got involved. Jordan Simon hit some shots and the more she can score for us, the better we can become. She does so many things for this team,” said Mike Sconsa, head coach of the Cougars, about one of his senior captains. “Skylar Dolphin and Nicole McDermott were assertive and aggressive in this game and Ally Hoffman and Abby Welter continue to excel on both ends of the floor. Faith Bower and Alyssa Lux continue to give us much needed production and minutes off the bench and Megan Smith did very well in this game in her minutes.”

It was another dominating performance for Cascade in their 43-point lopsided win over Anamosa. The Cougars raced out to a 21-4 lead after the first eight minutes of play and stretched that to a 38-10 advantage at half time. The defense continued to play a large role in the Cougars’ win as they held Anamosa to just six points in the second half for their 59-16 victory.

“We are officially halfway through the regular season and we have got to continue to work and get better,” said Sconsa. “Our ball security needs to dramatically improve as does our physicality under the boards. We need to be stronger in everything that we do. We are also going to need to continue to develop our depth.”

With the two wins that Cascade earned last week, the Cougars are now 12-0 for the season and sit on top of the River Valley Conference standings with a record of 11-0 just a game up on Monticello who is 10-1. Cascade and Monticello are scheduled to play each other twice in the next three weeks.

Complete statistics of Cascade’s win over Anamosa were not available at press time.