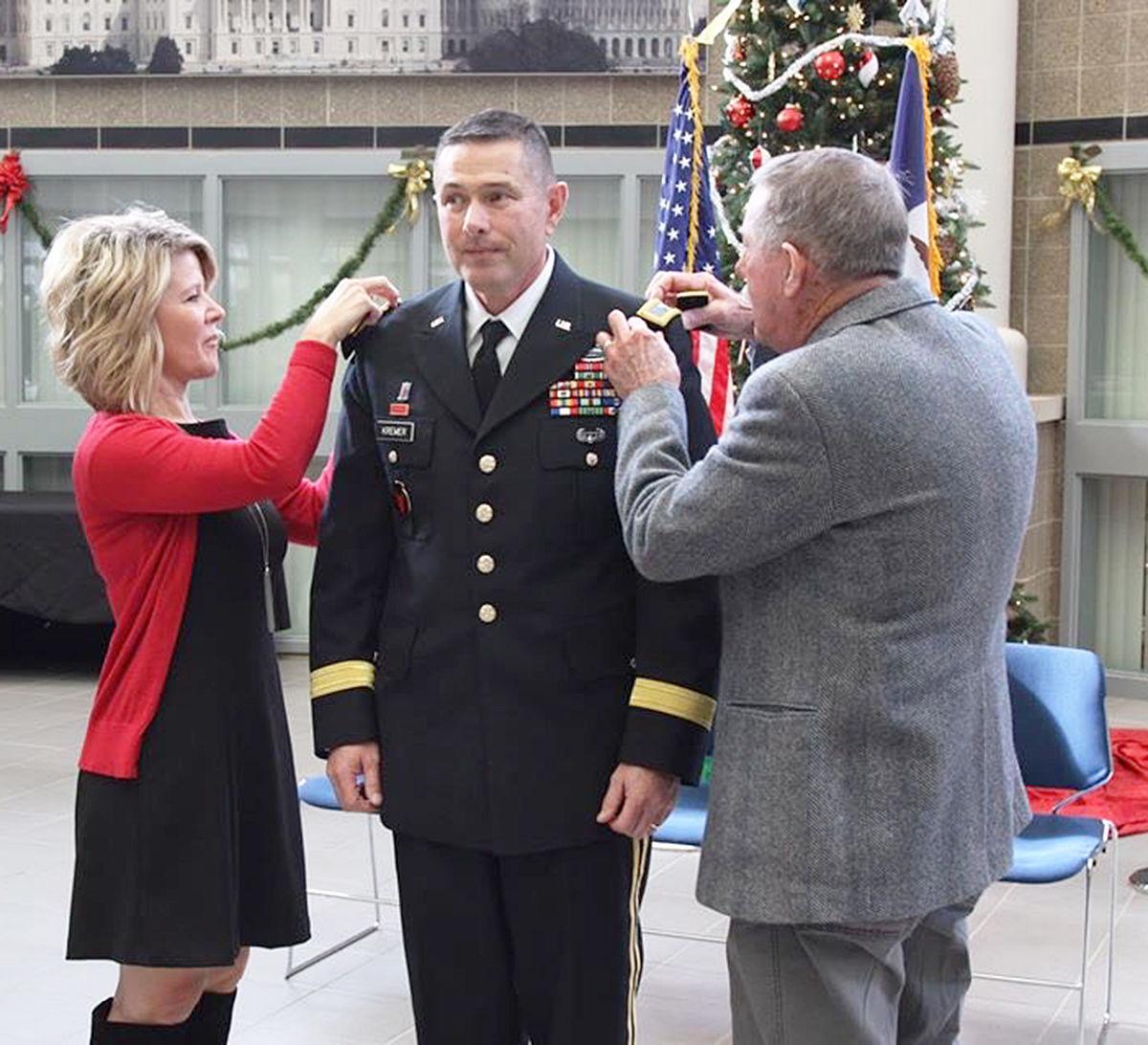 Steve Kremer has been called a lot of things during a 30-year-plus military career, but now when he’s in uniform you should call him brigadier general, and salute him crisply if you’re enlisted.

The son of John and Linda Kremer and a 1987 graduate of Cascade High School, Steve Kremer was recently promoted in the Iowa Army National Guard.

Kremer, who now lives in Cherokee, was promoted in front of his parents, his wife, Gail, and children Noah, Bryce, Alayna and Ava, along with members of his extended family.

Kremer said he originally enlisted in the U.S. Navy Reserves in 1987 as a way to help pay for college. “I switched to the Army Reserves in 1989 so I could attend ROTC at (the University of Northern Iowa), then joined the Iowa Army National Guard after my commission in 1991.”

He credits his fascination with the military to having other family members involved. “I have multiple family members (including my father) that are veterans and I was always intrigued with being in the military. I have remained in uniform now for over 30 years. The reason I have stayed so long is a sense of doing something greater than myself as well as on-going success along the way. It has been an amazing time being able to serve both home and during deployments around the world.”

His service has taken him to Afghanistan in 2010 as the commander of the 1st Battalion, 133rd Infantry, and along the way, he has served as an infantry platoon leader, executive officer, and company and battalion commander.

Kremer earned a bachelor’s degree in criminology from UNI and a master’s in strategic studies from the U.S. Army War College in Carlisle, Pa. He also attended the Infantry Officer Basic Course in Fort Benning, Ga. He’s also wise enough to realize how important having a strong support system is at home.

“My wife and I have been married 24 years and our children range from college down to elementary school. I have been blessed to have such a supporting family,” Kremer said. “I would not have been able to remain in uniform over the years without the support of my wife and children. I also have to give a huge thanks to my parents who have supported my wife and kids while I have been away on deployments. I could not have done what I have done without all of their support.”

Kremer’s civilian role is as a juvenile court services supervisor for the 3rd Judicial District. He has enjoyed his time and experiences in the military, and recommends others give it strong consideration. “I highly encourage everyone to consider joining the military,” Kremer said. “We have less than 1% of the current U.S. population that has served in uniform. Whether you do your base years or stay well beyond, whatever you join for, college benefits, employment or patriotism, I encourage everyone to consider the military and supporting our nation and the freedoms we get to enjoy each and every day.”