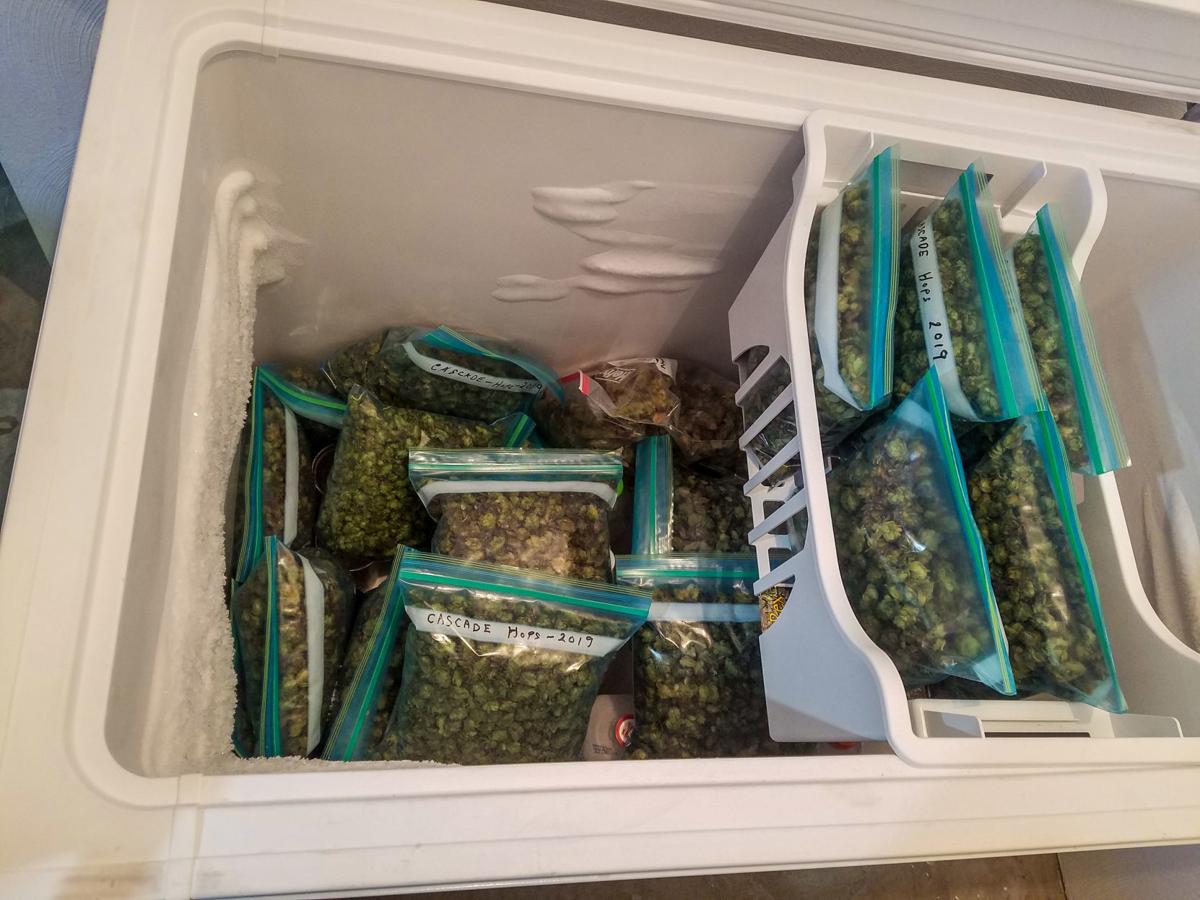 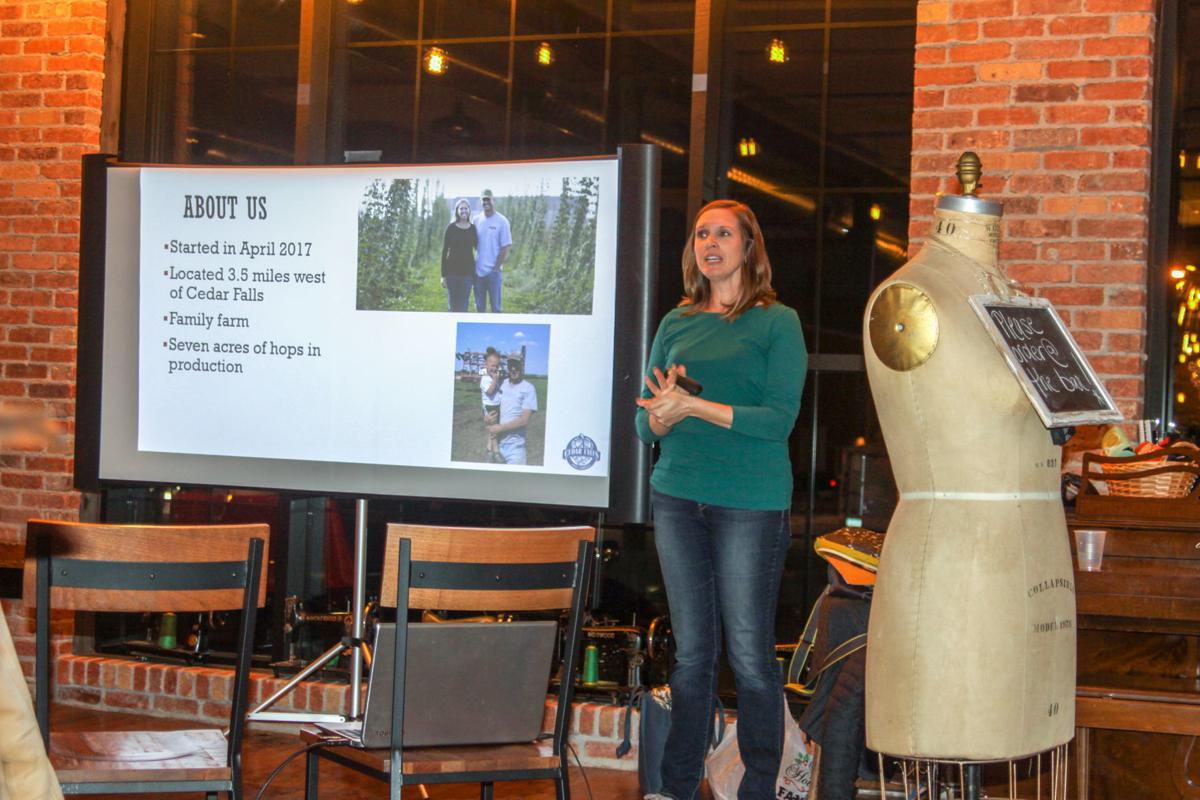 It’s not often that a speaker encourages the audience to frequently leave their seats during a presentation, but for Keri Byrum, the act was central to her message.

And that message was simple — drink more beer and support local breweries.

Speaking to a packed taproom at Textile Brewing Company in Dyersville, Byrum and everyone else had beer on the brain, specifically the wealth of information surrounding its ancient central component.

Byrum’s presentation was a mix of agriscience, historical overview and practical implementation, all laced with quips throughout.

Byrum is one of the proprietors of the Cedar Falls Hops Company, a seven-acre farm that supplies breweries near and far with beer’s signature ingredient.

Humans and hops have a long and storied history together, first being mentioned in European tomes some 3,000 years ago.

Brewers of old formed a loving symbiotic relationship with the hops plant, which provided humanity a better tasting beer that contained essential antibiotic properties, while simultaneously rendering it a longer shelf-life.

“Beer was actually healthier than water for a while there,” Byrum said. “And we still keep that in mind today.”

But hops weren’t just a way to create a beverage that melts away inhibitions; in fact, they used to be very serious business. Reinhetsgebot, a Bavarian law from the early 1500s, set rigid regulations for the production of beer, including that it could only be made from water, barley and hops. There was also language setting the price point, profit margins and even confiscation practices and penalties for those who created a beer deemed to be impure.

Byrum lent her expertise to the audience, which was filled with amateur home brewers looking to cultivate their own ingredients and some who had an interest in the commercial hops game.

Either way, Byrum said she feels it’s important to promote the growth of local Iowa hops.

Today, Byrum said over 95% of American hops come from the Pacific Northwest and, much like the grapes used in wine, the flavors emanating from hops are a product of its environment.

“There isn’t anything special about being an Iowa beer if everyone is getting the same ingredients from Oregon,” she said.

The official term, terroir, states that flavor and other characteristics come from the soil and atmosphere, meaning that even hops grown just the next town over can have unique properties.

In her estimate, there are probably less than 100 acres of commercial hops in Iowa, making it all the more important to support anything and everything that utilizes Iowa-grown hops.

But for those actually looking to turn a profit off a commercial hop crop, Byrum suggests using some caution and doing plenty of research before diving in.

“These are not a money maker if you don’t have a buyer,” she said. “We spend more money on the marketing side than we do on the growing side.”

For this reason, she said it’s more important to ask potential customers what they’re looking for rather than worry about what kind of poles or irrigation system you’d like to use. It’s also important to see what other area farmers are growing, as an over-saturated market will also result in fewer sales.

She said it can be difficult to decide what variety of hops to plant, as there are always different trends in the craft beer circuit.

And a lot of the most desirable hops are also proprietary, or in other words, patented.

She said she once called a farm in the Pacific Northwest to see if she could possibly get her hands on one of their proprietary species, only to learn how closely guarded they are.

“It was a very short conversation,” she said.

Infrastructure for commercial practices also requires a significant investment, which she estimates was around $12,000 to $15,000 per acre.

At the Cedar Falls Hops Company, they use 22-foot tall poles sunk four feet into the ground, which are then strung with about 10 miles of cable to support the vines. The entire operation is also laced with a drip irrigation system to sustain the estimated 8,000 plants on the farm.

The plant itself is tall once mature, reaching some 15 to 20 feet in height, and they come with a 25-year lifespan. But it takes about three years for the plant to reach maturity.

“We spend a lot of time in a scissor lift during the summer,” Byrum said, adding that the industry is incredibly labor intensive.

During harvest, the hops plants are cut, dried and taken to a pellet mill. Hops can be used in their natural state for brewing, but Byrum said the pellet form takes up less space in kettles, which some larger-volume brewers prefer.

She said they hope to harvests about 1,500 pounds of hops per acre. To get hops processed industrially, she said you need about 500 to 1,000 pounds for the process to be worth it.

For the home-growers who are just interested in a crop for themselves or a friend, it was asked if there was any technique that could be utilized to speed up the harvesting process.

“Beer and friends,” Byrum said. “And they have to be good friends.”

When harvesting by hand, each plant can take about an hour to process, she said.

But the good news for the casual backyard garden grower is that hops are not a picky plant, even growing in some desert regions, but they do need water and plenty of sun, especially in those first couple years.

The hop growth season typically begins mid-April, until fruition in September, but once May comes around things really get interesting, when the plants can grow between six and eight inches a day.

Around the Fourth of July or the Summer Solstice, the plants are typically done growing vertically and will begin to branch out sideways and flower.

One of the biggest threats to hops plants are the same enemies many tomato and cucumber plants face — mildew and pests.

But as far as pesticides are concerned, Byrum stresses to make sure whatever is being used is actually formulated for hops.