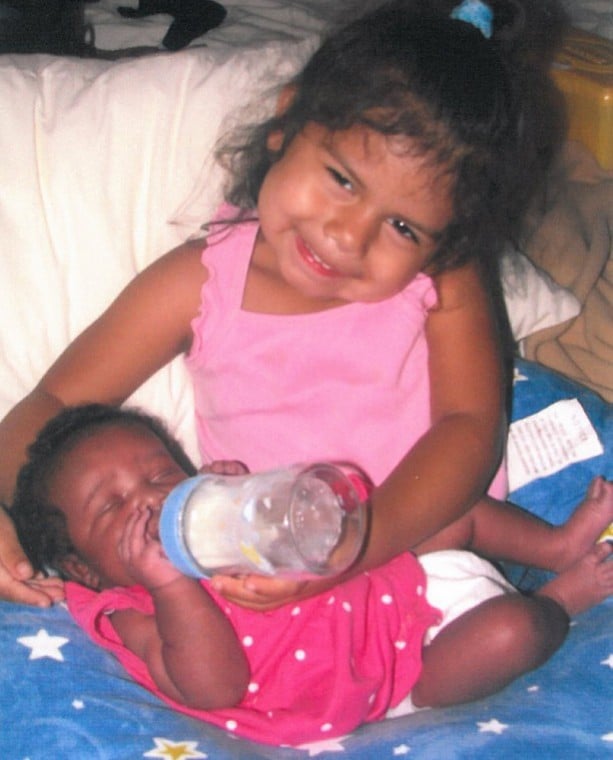 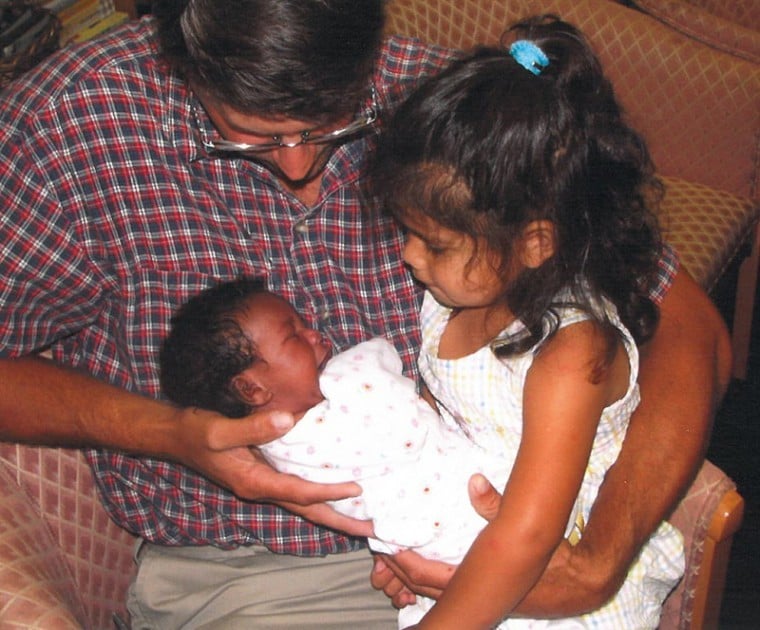 Brian Turnis, assists daughter Bella in holding newborn daughter Gabby, shortly after her adoption in 2007.  Both daughters were adopted through Abrazo Adoption Associates in Texas. 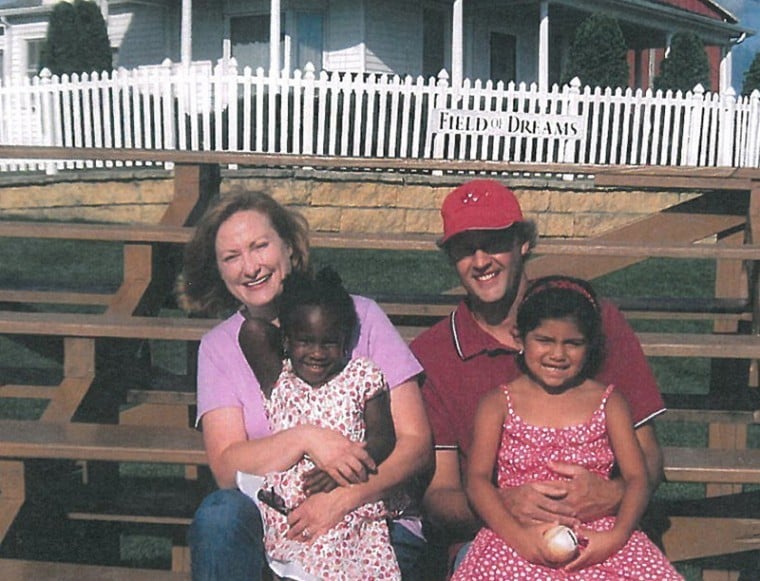 Brian Turnis, assists daughter Bella in holding newborn daughter Gabby, shortly after her adoption in 2007.  Both daughters were adopted through Abrazo Adoption Associates in Texas.

By marrying his girlfriend Nicole in 2002, Brian Turnis knew he would never have biological children. Nicole, having a hysterectomy at 25, had already come to terms with the fact that if she wanted children, she would have to adopt, and was grateful Brian understood and was OK with it too. Two adoptions later, the couple is starting the search for a third and final time.

Brian and Nicole's daughters, Bella and Gabby made their way to becoming Turnises on very different paths.

The couple began their first adoption process in January 2004, with Abrazo Adoption Associates in Texas. They got busy putting together a profile to show prospective birth parents, attending orientation and having a home study done.

All the work paid off because that summer, a pregnant woman named Elizabeth saw their profile and wanted to get to know them. After a lengthy and informative phone conversation, Elizabeth wanted to meet them in person, so the couple made the trek to Texas.

Six weeks later, on Aug. 22, 2004, a little baby girl of Hispanic decent, named Bella was born. Nicole and Brian were in the room for the delivery. Brian even experienced cutting the umbilical cord.

Nicole explained she was "so happy Brian got to do the dad thing."

Although Elizabeth signed the adoption paperwork after the birth, she still had a two day waiting period before all parental rights were revoked. As reassuring as that might be for the birth mother, having been a part of the birth and meeting the baby, the Turnises spent 48 worrisome hours, wondering their fate.

As the waiting period drew to a close, Elizabeth remained of the opinion that the Turnises were the right fit for Bella. Brian and Nicole breathed a sigh of relief and when all the red tape was clear, made their way back to Iowa, baby girl in tow.

About two years later, the couple decided they wanted to expand their family again. Gabby's journey to Brian and Nicole was a little more unexpected than Bella's. Gabby, of African American decent, had already been born to a woman named Andrea. In fact, the paperwork had been signed and the 48-hour waiting period was up by the time the Turnises even knew there was a possible child for them. Gabby was born on Aug. 28, 2007. Brian and Nicole were notified three days after the birth. They received the birth mother's medical history and made plans to head to Texas, with Bella along for the ride. Gabby was officially placed with the Turnis family on Sept. 7, 2007.

Fear of the unknown: open adoption

Both Elizabeth and Andrea have the Turnises phone number and address. Bella has even met her birth mother since her adoption. Although Gabby hasn't had that opportunity yet, both girls can point out and name their birth mothers in pictures in their baby books.

"A lot of people are afraid of open-adoption because they are afraid the birth parents are going to show up on their doorstep, and obviously that's not the case," Nicole explained.

In fact, after the 48-hourwaiting period, the birth parent's rights are officially revoked.

Brian and Nicole refer to themselves as advocates for open adoption. Couples considering adoption have called them to ask questions and for advice.

They explain, "It is healthier for everybody."

When Brian and Nicole went through the adoption orientation, they heard from adoptees that knew nothing about their birth parents. "All they want to know is where they came from," Brian said.

Knowing this, Brian and Nicole speak of Bella and Gabby's birth mothers often and in high regard to the girls.

"We give them so much credit," Nicole said. "It's a very hard decision. They probably think about these children every day."

Every so often, the Turnises hear from the birth mothers by phone or mail and in the meantime, "We pray that they are doing well, because they are part of our family too," Nicole said.

Gabby's birth mother chose the Turnises because she was fond of the idea that Gabby would have a sister, while Bella's birth mother liked that they lived on a farm. Ironically, if anyone was suited to grow up on a farm, Brian and Nicole believe that is Gabby. Gabby's birth family lives in Houston in a very different atmosphere from an Iowa farm, but Brian and Nicole said they couldn't imagine her growing up anywhere else. She loves animals and being outside.

The couple describes Bella as their quiet, yet dramatic child and Gabby as their wild child, but they act just like any other set of sisters.

Both of the Turnis's Catholic raised daughters have taken on some personality traits from both sets of parents. As an infant, Brian and Nicole could never understand why Bella loved country music so much. Later on, they found out her birth mother listened to country music all the time when she was pregnant. Similarly, Gabby loves chewing ice, a habit the Turnises found out Andrea took up while pregnant.

At the same time, the girls have taken on personality traits of their adoptive parents. Nicole even goes so far as to call Gabby, "Little Brian," as she helps him on the farm.

"You forget. You forget, and it doesn't matter. They are our children and we would do anything for them," Nicole.

Not knowing much about open adoption, Brian was reluctant and nervous at first. Regardless, when they started the adoption process, the couple dove in head first.

Initially, they were set to adopt a little boy in the spring of 2004. While in the hospital, the birth mother changed her mind, deciding to keep the child. It was a huge shock to the couple who had reservations to begin with, but had decided to trust in the process and that God would lead them where they were needed.

Nicole explained that Brian was there for her during that emotional time and with time they came to realize that "everything happens for a reason."

During the second adoption process, Bella's birth mom was pregnant again, with a boy and wanted Brian and Nicole to adopt him as well.

She too changed her mind by the end of the pregnancy, providing another shock to the couple.

The couple remain of the attitude that "whatever will be, will be."

For the most part, they said the community has accepted the children, but it was hard to get used to the side-long glances from strangers, and the questions about if the girls were adopted, to which the parents look at each other knowingly, and then look back at the stranger and say, "Yes!"

The couple made a family decision this past summer to start the adoption process for a third, and final, time.

While going through orientation, the agency informed the couple that a third time adoption normally takes longer to get placed. In fact, all the other couples in their orientation group have adopted or are matched with birth parents for an adoption.

This time around, the family of four decided they wanted to add a boy to the mix, although Brian admits, he is hoping for multiples.

They have received a call about two and 4-year-old siblings that might possibly need a home. Although, nervous about how the siblings would get along, the Turnises talked it over and decided they would be open to it, because everything happens for a reason and trust that God will lead them on the path they are meant to go.

They haven't heard back yet about those children or on any other possible adoptions, but they're keeping their hopes up.

Nicole divulges that the teen years will probably bring challenges, "but we'll just roll with the punches," gesturing toward Brian and the girls perched on the floor of their living room, Nicole explained with a smile on her face, because "this is our family."

WASHINGTON (AP) — President Joe Biden’s COVID-19 vaccination campaign hit a snag when federal regulators recommended a “pause” in administering Johnson & Johnson shots. But the White House portrayed the action as important validation of his measured approach throughout the rollout.

WASHINGTON — The U.S. is recommending a “pause” in administration of the single-dose Johnson & Johnson COVID-19 vaccine to investigate reports of potentially dangerous blood clots.

Dubuque County and the City of Dubuque have opened a call center as part of their new collaboration on a second vaccination site, with lines open now.

Pfizer announced today that its COVID-19 vaccine is safe and strongly protective in kids as young as 12, a step toward possibly beginning shots in this age group before they head back to school in the fall.