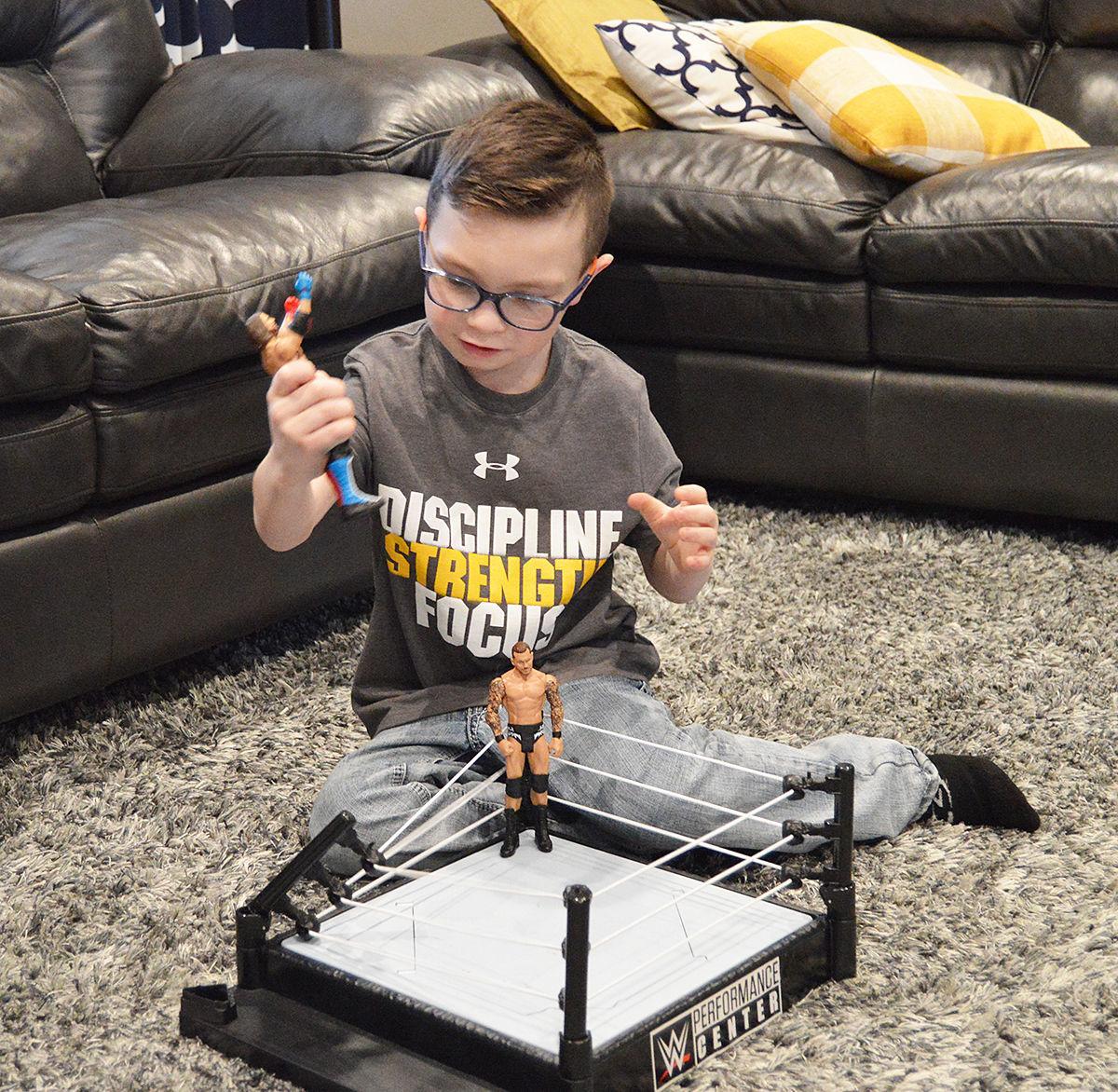 Cascade resident Benny Stoll, 7, plays with one of of his favorite toys, which also symbolizes the way in which he has grappled with a heart defect. 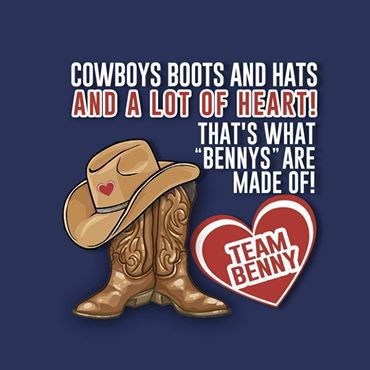 The “Team Benny” logo was adopted by many area residents on their Facebook pages to show their support for Benny.

Cascade resident Benny Stoll, 7, plays with one of of his favorite toys, which also symbolizes the way in which he has grappled with a heart defect.

The “Team Benny” logo was adopted by many area residents on their Facebook pages to show their support for Benny.

While sitting in the living room of the family’s rural Cascade home, 7-year-old Benny Stoll propels one wrestling action figure through the air with his hands, landing it onto the top of another inside a toy wrestling ring.

To the untrained eye, this might be typical boyhood fun, but for those who know him, this simple moment of make-believe is a microcosm of Benny’s real-life battle with a very formidable opponent — his heart. And just like his action figure that landed its finishing move off the top rope, Benny is determined to emerge from his match the winner.

Trouble at the opening bell

Benny and his twin sister, Ellorie, were born 10 weeks early to Amanda and Doug Stoll, and Benny’s battle began immediately. “He was born with a heart defect called “transposition of the great arteries,” Amanda said. The Mayo Clinic states of the disorder, “Transposition of the great arteries is a serious but rare heart defect present at birth (congenital), in which the two main arteries leaving the heart are reversed (transposed).” It changes the way blood circulates through the body, leaving a shortage of oxygen in blood flowing from the heart to the rest of the body. Without an adequate supply of oxygen-rich blood, the body can’t function properly so it must be addressed immediately. “The day he was born they did a procedure to put a hole between his ventricles so that he could get blood that was mixed,” Amanda explained. The hole eventually closes on its own.

Benny and Ellorie were born at the University of Iowa Hospitals and Clinics due to being as premature as they were, and UIHC became Benny’s home for his first two months. “He had open-heart surgery when he was 2 months old,” Amanda said, “He had to get big enough that they could do the surgery.” By her account, the surgery went very well and they didn’t anticipate any more surgeries, except maybe a stent as he had growth spurts. “Knock on wood, he wasn’t supposed to have any more issues,” said Amanda. “There’s a high success rate for the surgery.”

Benny continued growing and thriving, hitting all his developmental milestones, although he was smaller due to being premature and to his heart defect, which also wore him out quicker.

Benny’s mom gets a phone call

Last spring it was the day of Cascade Elementary School’s annual color run, which Benny was participating in for the second time. “I got a phone call that Benny had passed out, that he came to and that the ambulance had been called,” Amanda recalled vividly. She was working as a teacher in Monticello at the time. “My heart just sank,” she continued. “It was like, ‘here we go.’ I just knew it was something with his heart.”

Benny may have had a guardian angel or several with him that day, as his grandmother was volunteering at the event and could tell something was wrong as he came around. Amanda said Benny passed out in principal Dan Wendler’s arms, and the school nurse was there as well as her son, who is a doctor. “I made it from Monticello to Cascade in record time,” Amanda said. She also praised the work of the medical staff and school personnel for how they handled the situation.

Just as lucky as the Stolls were that there were so many people with medical training at the color run, they were also lucky enough that Benny’s cardiologist — who is an Iowa City doctor who does an outreach clinic in Dubuque — was conducting the clinic the day after the color run. Benny’s visit to the ER did not find anything noteworthy, so they visited the cardiologist the next day as a precaution. After seeing an area of concern, the doctor ordered a CT scan.

Amanda said that a branching coronary artery was not getting enough blood to the left side of Benny’s heart, which caused it to go into heart arrhythmia. “It was kind of like he had a heart attack.”

The CT and another heart catheterization confirmed it, and doctors performed a coronary bypass on Benny Dec. 12. He wasn’t about to get pinned to the canvas by his second surgery either. After just five nights in the hospital, he was back home in plenty of time for Christmas.

“It was unbelievable how quickly he recovered,” recalled Amanda, remembering how long Benny’s first two months in Iowa City seemed in comparison. He is back in school and will be medically monitored closely for a while. His follow-up care will include another CT scan to get images of how the arteries are working.

Now with his recent surgery behind them, the Stolls have had time to collect themselves and marvel at many things they’ve seen regarding Benny’s experience.

“It was almost a blessing in disguise,” Amanda said about Benny’s passing out at the color run with potential help all around. “If that would have happened when he was on his own, we would have had a different outcome.”

Since Benny was born, the Stolls and some other family members and friends formed “Team Benny” and have worn official Team Benny t-shirts when walking in the Dubuque Heart Walk for the American Heart Association. If you didn’t know what the logo looked like before his surgery, one glance at just about anybody’s Facebook page in Cascade when he was undergoing his operation revealed how many around the community had adopted the logo as their own in support. “It just grew community-wise,” Amanda smiled. “Everything was #TeamBenny. The love and support just from our community is outstanding. It just makes you feel good knowing that we have such a strong support system. The pride our town has for its own people is just awesome.”

And Benny has earned the right to wear the championship belt.